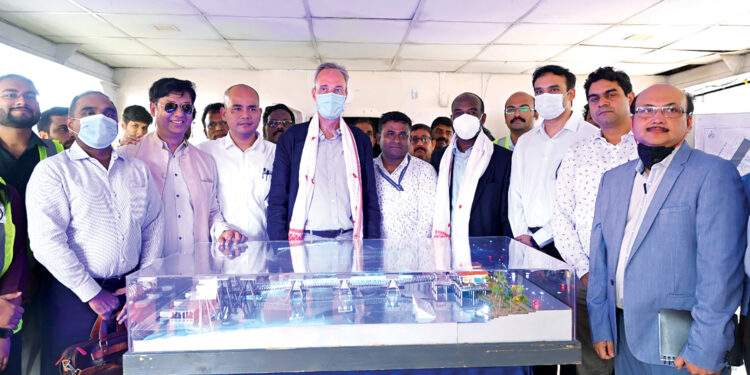 The World Bank team in the office of the Assam Inland Water Transport Project.

Assam is warming up to the World Bank, the multilateral lending institution revered by States and countries the world over.

Building on the history of the State’s ties with the institution, Martin Raiser, Regional Vice President, South Asia of the Bank accompanied by Auguste Tano Kouame, Country Director-India and a team of officials visited Assam to explore strategic State partnership and consolidate the existing engagement.

The World Bank has had a long relationship with the Government of Assam over the last two decades. Its total ongoing funding for Assam State-specific projects is approximately $349 million in agriculture, transportation, public finance management and delivery of citizen-centric public services.

Assam is one of five States with which the World Bank has a strategic State partnership framework.

The Bank was keen to support the proactive initiative of the present dispensation in Dispur led by Dr. Himanata Biswa Sarma.

“The visit reflected the Bank’s interest in deepening the recent State Partnership framework, with particular focus on knowledge on how the Bank can help Assam to unlock growth, support its development vision, and strengthen disaster resilience and Assam’s role in promoting regional cooperation,” read an official note.

At present, there are four ongoing projects under implementation and five are pipeline projects under the assistance of the World Bank in Assam across critical sectors such as, transport, agriculture, infrastructure and connectivity, health, river basin management, financial reforms, citizens’ services, institutional reforms, etc.

“Under the Scheme, basin management of tributaries of Brahmaputra and Barak rivers like Beki, Burhi Dihing, Jiyadhol, Bhogdoi, Singla, Jatinga, Gainodi, Jiyabharali has been taken up. A successful implementation of the project will help Assam overcome the problems of erosion and floods in the coming years,” said a senior official of FREEMA.

Ankur Jain the Project Director of Assam Inland Water Transport Project told Asom Barta that the team studied the flow of the water of the Brahmaputra, and the challenges posed by it. “The team explored the possibility of ease in transportation courtesy a development in the inland water transportation, besides potential of river tourism in the State,” he said.

During the two-day visit to Assam, Raiser and Kouamé received a first-hand view of the impact of the ongoing WB-financed projects in the State. They visited Rangia in Kamrup district where they met members of the farmer producer organization of the WB-supported Assam Agribusiness and Rural Transformation Project (APART). Through the APART project, the Government of Assam is keen to double farmers’ income in the State. The Bank is helping agricultural producers access new technologies, markets, and finance, while also facilitating private investment in the sector. The duo interacted with private investors in the micro, small and medium enterprises (MSMEs) being supported under the same project.

Nishat Hussain of Dong Valley while talking to Asom Barta said, “The World Bank team coming to our premise is a big thing for us. They inquired about the support that we have received from the Assam Agri Business Growth Lab under APART. They were very happy at our success.”

In the meeting with the Chief Minister, the WB VP discussed pipeline projects, worth nearly $1 billion, which it seeks to support in Assam’s growth trajectory. This pipeline projects are in response to the Government of Assam and the Ministry of Finance, Government of India’s request for support to unlock the State’s growth potential, strengthen its water infrastructure and improve its health systems. These proposed projects have the objective to increase trade and investment, build resilience to increasingly frequent and severe climate-related shocks, and spur the development of the agriculture, tourism, and logistics sectors to boost growth and employment.

Raiser told the Assam Chief Minister that projects worth $450 million are likely to be presented to the Bank’s Board of Executive Directors by June 2023. It also expressed commitment to continue to support sustainable flood management measures in the Brahmaputra basin and enhancement of the iconic river’s economic potential – through augmentation of waterways trade and transport systems.

Dr Sarma launched the State Public Procurement Portal (SPPP) developed under the ASPIRe project assisted by the multilateral lending institution during his meeting. Assam is the second State in the country to be launching an SPPP and fourth State to have Procurement Act of its own. The SPPP of Assam will be a single source of truth for all departments, bidders, and public. This single centralized platform will be accessible to public to enable them to know about the activities of public procurement of goods, works and services by all departments of the State Government or any State Public Sector Enterprise ensuring transparency, accountability, and value for money. This one stop shop developed in collaboration with NIC will also feature a grievance redressal system and feedback mechanism.