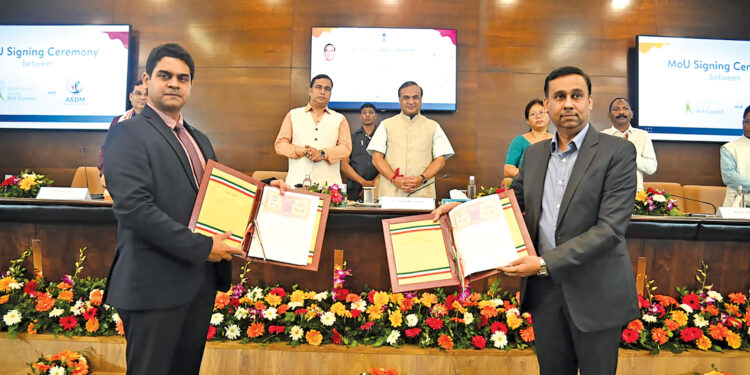 The Brahmaputra River has always been a lifeline of Assam. It is turning out to be a saviour once again, this time for its youth because of the six MoUs and an MoA signed on October 17 by various departments of the Government of Assam (GoA) with leading companies operating in India. Most of these were conceived during a journey in the river when the Chief Minister Dr Himanta Biswa Sarma called up a senior IAS officer, who was on his way back from Majuli, to work on ways to get the youth of Assam employed in the private sector with meaningful jobs and growth opportunity. These MoUs and the MoA will bolster employment opportunities for the youths of the State and provide them with the skill sets to be on their own in this competitive world.

Assam Chief Minister Dr. Himanta Biswa Sarma told the gathering that these understandings and agreements will contribute immensely to the overall development of the State. He said that leading Indian and global corporations becoming part of Assam’s growth trajectory is a positive indicator for the State. MoUs with Google and Microsoft while bringing in employment opportunities is a big stride towards digital education. He specifically mentioned that the MoU with IHCL will result in a skill centre being set up at the upcoming infrastructure of the Omeo Kumar Das Institute of Social Change and Development in Sonapur near Guwahati. “This will result in raising capable human resources in the tourism and hospitality sector,” the Chief Minister said.

Sanjay Gupta, the Google country head, and its vice president appreciated the efforts of the Assam Chief Minister in taking steps to step up the use of digital technology and development. “We are proud to inform you that just last month we have been able to incorporate Assamese language in Google Translator app,” he informed the audience in his speech.

The APDCL and public sector company SJVN Green Energy Limited on October 17 inked an MoU to produce 1,000 MW solar energy through floating solar panels in wetlands in the State. Chief Minister Himanta Biswa Sarma, in his address, termed the MoU as another step in making Assam self-reliant in power generation.

He said that ₹ 6,000 crore shall be invested to achieve the target. APDCL will invest 49% per cent of the capital while the balance shall be invested by SJVN Green Energy Limited. He said that the State Government was also contemplating to invest in power projects outside Assam, while stating that that works on projects with financial assistance from Oil India Limited and the Asian Development Bank to produce 1,500 MW will begin soon in the State.

SJVN Green CMD NL Sharma said that his company will accord full assistance to Assam to achieve the objective set out by the State Government.