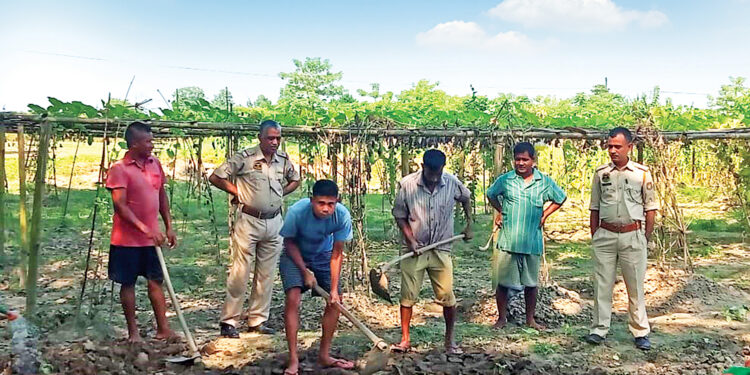 On a fine but misty December day, home guards Nazir Hussain and Abdul Salam presented themselves to Boribazar Police Patrol Assistant Sub Inspector Munindra Chandra Das for their posting. They would be posted in the camp for the next few months. Here they would, during their free time, voluntarily work on cultivation of Boro Rice Variety on the 15 bigha plus land allotted to Morigaon Police.

On the other hand, home guards like Baharul, Abhijit, Dulal, Dilip, et al, in Oujari Police Reserve are passionately looking after the 21 bighas of land near their reserve where they cultivate mustard, corn, bottle gourd, ladyfinger, and ridge gourd whenever they are free from their primary responsibility. While some water these plants, others are busy weeding out the wastages.

Cut back to a February afternoon, police personnel in Lahorighat Police Station were treated to a diet of vegetables grown in the farm around the Oujari Police Reserve in their lunch. This was based on the hard work of some of their colleagues, who had toiled the two fields.

This initiative had an interesting beginning. The then Morigaon Superintendent of Police, Aparna Natarajan, was inspecting the land allotted for Boribazar PP on a day in the month of September or October of 2021. She saw around 15 bighas of land lying idle. She was told by the local police official that the land was fertile. Besides, she came to know that there was idle land in Oujari as well. “This is a collective effort of Morigaon Police,” she told Asom Barta of the success of her initiative. “There was a consensus in the police that by the time construction begins on the land allotted, the police should utilise the two plots for agriculture whenever they were off duty. We started with mustard, and then moved on to vegetables while in the land in Boribazar, we started paddy cultivation. This may not be a project on a huge scale, but the very idea is a success story for Assam Police,” she told this reporter.

The overall produce figure presents a success story to boot: Nearly nine quintals of mustard, over five quintals of corn, over four-and-half quintals of paddy. Bharat Chandra Das, an assistant sub-inspector of Morigaon Police, who has volunteered to oversee the initiative told this newsletter that they have managed to raise ₹ 1.25 lakh by selling mustard, corn, and paddy in the open market. “The sales proceeds have been deposited in the Police Fund Unit. We generally distribute vegetables in the police barracks, cantonment and among officials in the district administration,” he said. “Our jawans are happy involving themselves in the fields. I go there occasionally and feel at home.”

“A certain percentage of the money we raise through selling our produce has been invested in buying pump sets, and other tools. We have also released seven quintals of fishlings in the pond at our Boribazar plot which had low land,” Aparna informed this reporter. Das informed this newsletter that the fishlings in the pond now weigh about a kilogramme while also talking of the Sali Dhan cultivation in Oujari, besides other vegetables.

“We have been supported by the District Agriculture Department here. They have given us inputs from time to time, including making vermicompost. Besides, neighbours around our land in Oujari gave us cow dung, ploughs, spades, etc., in the initial stage. In return, we gave them some of our produce, especially vegetables,” said Constable Akhtar Hussain, hinting at the trade off mechanism which is historic to this district courtesy the Jonbeel Mela.

Dibyajyoti Hazarika, Assistant Inspector of Agriculture, Morigaon told Asom Barta that he was excited to see the police coming forward with ideas on agriculture. “Once in a while I come and interact with them. If they need my advice, I offer that as well. This initiative can be replicated by many other departments who have a land bank across Assam,” he said.

Incidentally, the police are not claiming that their agricultural produce is 100% organic, but those working on the field vouch that it is, almost.