Medical infra gets a facelift 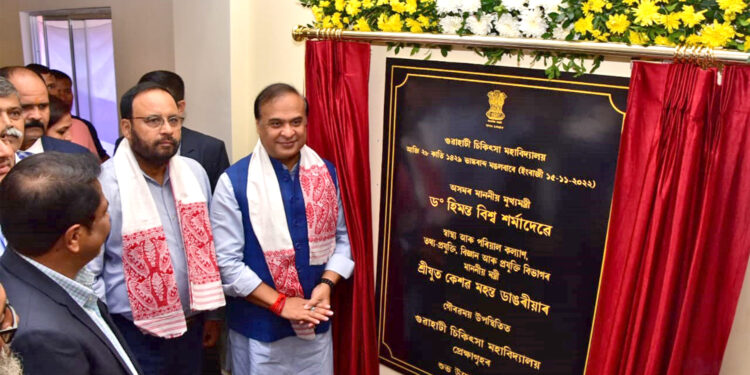 Medical facilities in the State got a significant boost in November with a slew of announcements by the Government besides a CSR gesture by a leading corporate group in the country.

The first of these was the announcement of the Government to spend ₹300 crore to boost infrastructure in Assam’s oldest medical college, the Assam Medical College in Dibrugarh. Here Chief Minister Dr. Himanta Biswa Sarma announced a package of ₹ 300 crore during its platinum jubilee celebration to enable it to transform itself into a state-of-the-art research institute responsive to deal with the new age ailments.

Most of the allocation will be spent on improving and constructing teachers’ quarters and students’ hostels, he said while inaugurating the platinum jubilee celebration.
Just the next day, the State Government inked an MoU for the infrastructure development of the academic block of the second medical college of Guwahati with Bright Star Investments Pvt. Ltd.

Commissioner and Secretary (Medical Education & Research) to the Government of Assam Siddharth Singh and promoter & founder of Bright Star Investments Pvt. Ltd.,Radhakishan Damani, signed the MoU, an occasion which the Chief Minister termed “ historic” stating that this would herald a new beginning in medical education in Assam. It is for the first time that the Assam government has collaborated with the private sector for building infrastructure of a medical college in the State.

“We are going to start construction of five more medical colleges at Golaghat, Bongaigaon, Marigaon, Tamulpur and Dhemaji during this month and work for three more medical colleges proposed at Sivasagar, Karimganj and Goalpara will be taken up very soon. In the next five years Assam will have a total of 24 Medical Colleges, greatly improving the availability of doctors and medical care in the State.,” he said.

The Chief Minister said that with the increase in medical colleges in the State, the number of MBBS seats have also increased from 726 in 2014 to 1,200 in 2022.
Minister Health and Family Welfare Keshab Mahanta; CSR head of Damani Foundation, Madhu Chandak, Principal Secretary Health & Family Welfare Department Avinash Joshi, Commissioner & Secretary, Medical Education & Research, were also present on the occasion.

On November 15, Dr. Sarma inaugurated several infrastructure additions to the Gauhati Medical College and Hospital, aimed at transforming the region’s premier institution into a world-class centre dedicated to medical studies and services.

Of the five new buildings inaugurated by the Chief Minister, a 156-bedded guest house, named Vishram Sadan, has been built at a cost of ₹ 13.5 crore under corporate social responsibility (CSR) funding from Power Grid Corporation of India Limited. With separate dormitory facilities for men and women, it is meant to cater to the attendants of patients seeking treatment at GMCH.

This apart, the Chief Minister inaugurated a state-of-the-art 450-seat capacity college auditorium with partial financial support from Oil India Limited.
Addressing the gathering he said that these additions would go a long way in helping the Government realise its long-term vision for GMCH.