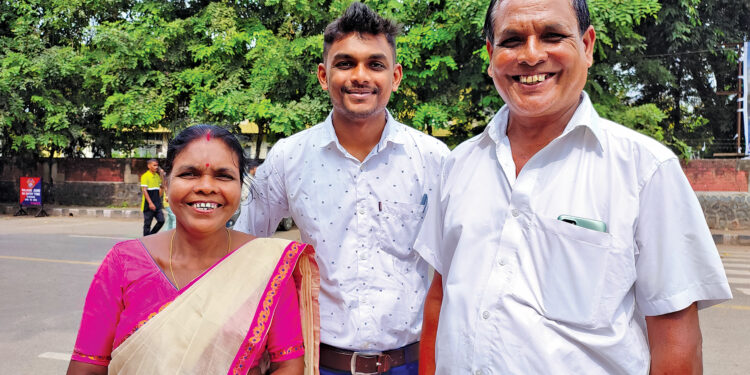 A photograph is worth a thousand words. The one above is of Ramprasad Hazarika, a home guard with the Assam Police, his wife, and his son Pallab, who was handed a letter of appointment as a Sub-inspector with the Assam Police recently by the Government of Assam. The smile reflects a gift of the hard work that Pallab had put in leading up to the day when he appeared in the examination and cracked it. “This is my day. The Department in which I am working as a home guard is where my son will work as Sub-Inspector now. His recruitment was fair. I thank the Chief Minister,” said Ramprasad, hailing from Raha in Nagaon district.

He was one among the 11,236 appointees of the Government of Assam on September 23 at the Veterinary College Ground in Guwahati. “Since 2016, I managed to pass all examinations conducted by the Assam Police. However, a job was still some distance away. This time I broke the jinx,” Pallab told this reporter. “I have been rewarded for my hard work,” he said.

The Assam Government handed over the letters of appointment in 21 of its departments in this phase (Please See Box). The Chief Minister, in his speech, reiterated his commitment to a corruption free Government.

Kanika Chakraborty of Lumding, who received her appointment letter as a lecturer in Karimganj Model College, was finding it hard to hold back her tears after realising her dream of a Government job in a clean and transparent manner. “I was almost becoming sceptical by reading media reports on the absence of jobs in other States of the country. Today, I am relishing the result of my hard work,” she informed Asom Barta.

Among those present on the occasion were a number of Cabinet ministers.