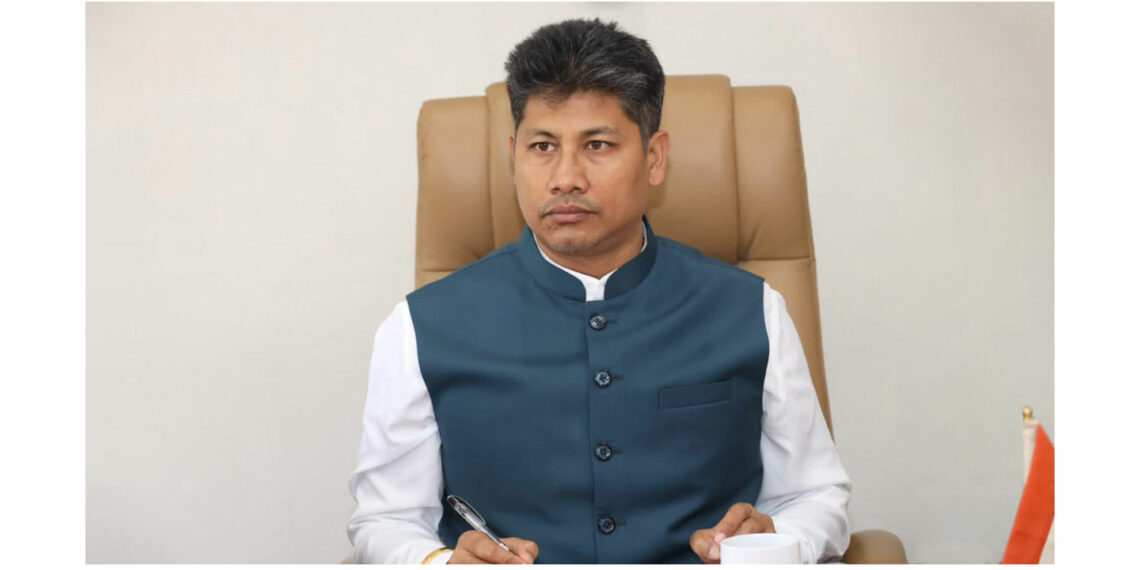 Asom Barta (AB) met Minister for Water Resources, IPR, Parliamentary Affairs, Social Justice & Empowerment Pijush Hazarika (PH) to discuss the flood situation and post-flood measures besides working of his other departments. This is an excerpt from the interview.

AB: How challenging has this year’s flood compared to the previous year/s?

PH: Flood is a major problem in Assam. I must admit for practical reasons that the problem cannot be solved in a year. However, our Government under a tireless Chief Minister has initiated steps which will go a long way in tackling the menace of floods. I must sound a note of caution here. We cannot stop floods but we can certainly reduce its impact. Our geographical location and topographical reality have placed us in a position wherein rains and water gushing down the hills from neighbouring States are a given happening each year. Therefore, I think that reducing the damage or the intensity of floods is a pragmatic thought process for us.
As I speak to you, I can state that we are yet to get over floods for the season. A good couple of months are still there for the rains to come. Hence, to compare this year with the last year or previous years would be jumping the gun too soon. Yet, I must admit the enormity of the flood was unimaginable, especially in Silchar, Nagaon and Hojai. On the contrary, districts like Morigaon, Dhemaji, which are generally the worst hit districts each year, have escaped major damage. In my constituency Jagiroad, the impact is way too less than previous years. Previously, Morigaon district would remain flooded for months together, but not this year. The plausible reason I see for this is that we constructed a 14-kilometre embankment on the banks of the Brahmaputra River in the district. Similarly, we spent about ₹ 150 crore in Dhemaji last year, of which I must mention the innovative Ready Made Embankment Technology used on the banks of the Jia Dhol River. The reason for this anomaly is the intensity of the rainfall which was one of the reasons for the Dima Hasao landslide. The Chief Minister had met Water Resources officials and instructed us to study the intensity of the flood in these districts. I think there were technological issues or limitations in our approach which we are now going to address. For example, when we build an embankment, we must have one or more culverts or a sluice gate to lessen the force of flood waters. This, we have learnt from mistakes of the past.

AB: A problem which hardly gets attention is erosion. How do you visualise it?

PH: Oh! It is a major issue for us. There are two steps that we have undertaken. Temporary work and permanent ones. Contrary to the general perception that we work during the floods, the reality is that ours is a Department that needs to work before and during the floods. Temporary works are done from May to September each year while the permanent one begins in November and finishes by April, prior to the onset of heavy rains. We have given ₹ 1 crore each to all districts in the month of May for temporary work. Earlier, this money was given to them in November. This year we had put in place geo bags, launching bags, and porcupines before the onset of floods. I can tell you with confidence that this has saved us from what could have been an even bigger flood this time. Besides, this step has saved embankments and even erosion.
AB: What is the Government’s assessment of damage in this year’s floods. Some reports have put it at ₹ 3,400 crore, some say even more?
PH: I have already told you there are a good two months more of rain in Assam. Hence, it is premature to point a finger at a figure. Damage assessment is currently on. This is the work of Assam State Disaster Management Authority and the Revenue Department. Whatever figures you are quoting are imaginary ones and not official figures of the Government of Assam.

AB: Please highlight relief and rescue measures undertaken by the Government during and after the floods.

PH: In my 23 years of political life, out of which I was an MLA for over 11 years and a minister for nearly four-and-a-half years, I have never seen a Chief Minister who could announce cash transfer to the flood-affected from the State Disaster Relief Fund after stepping out of relief camps. The flood-affected families have received ₹ 3,800 for utensils and clothing. He has announced relief of ₹ 98,000 for all those whose houses have been washed away. They will receive the money in August. Grants for books have already been transferred to the account of those who have suffered. This is unprecedented. We are working like ‘Team Assam’.
AB: You are trying to reform the Directorate of Information and Public Relations. Can you throw some light on it? For example, regulation on digital media.
PH: On instruction from the Chief Minister, we are working on releasing the pending bills of media houses within a month. Earlier, it would take six months or even more to clear these dues. We have also realised that people are not aware of a lot of government schemes, Hence, we have increased the awareness campaigns. Regarding digital media, we are waiting for the Centre to bring in relevant regulations. Our idea is not to put a leash around the media. We believe any media house will regulate best when it regulates itself.