by AB Bureau
in Assam on the Move, English Edition
34
0 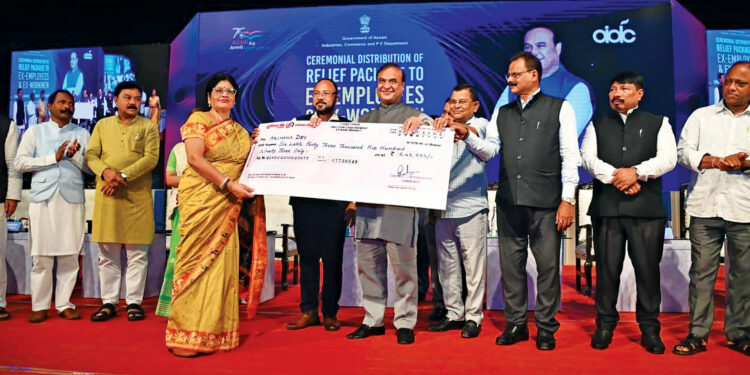 It was a night which the then Industry and Commerce Minister of the Government of Assam and a veteran politician Chandra Mohan Patowary says he will never forget. “It was around 1.30am of September 28, 2021. We were negotiating with the workers’ union of the Hindustan Paper Corporation on the compensation package. We arrived at an agreement. I informed the Chief Minister Dr Himanta Biswa Sarma who told me to finalise the deal. I did. It was around 5.30am. The Chief Minister came and signed it. I was astounded. In one go, a Chief Minister was willing to spend ₹ 800 crore to achieve a breakthrough and move forward. In my political career of more than 40-years, I have never seen a Chief Minister being so decisive when the stakes are so high,” Patowary recalled while speaking during the distribution ceremony of relief package to ex-employees and workmen of the defunct Nagaon paper mill and Cachar paper mill of Hindustan Paper Corporation Limited (Liquidated) in a programme in Guwahati.

This decisive action of the Assam Chief Minister brought tears of joy to almost all of the 2,751 employees of both the mills, including 748 contractual workers of the two mills. One among them was Nazmin Sultana, daughter of Abdul Nur who died of cancer in 2021.

Dr. Nirmal Kumar Sinha, a former physician of Nagaon paper mill, was another beneficiary. “I have an emotional attachment with the employees of Nagaon paper mill. I was there from 1995 to 2017. The trouble began in 2012 when the management started defaulting on timely release of salaries. I was fortunate to have merely defaulted on my LIC policies. Some had to sell their ornaments,” the doctor recalled. He is now with the Assam Cancer Care Foundation at its Kokrajhar Hospital.

“Once the mill closed in 2017, we were forced to spend our savings to run the household and on his treatment. We exhausted our savings in no time. We had to stop his treatment. I was a final year student of LLB when my father died. The financial package offered to us by the Assam Government is a fresh start for us,” Nazmin told Asom Barta.

This humanitarian gesture of the Assam Government would result in an outgo of ₹ 810.02 crore from the exchequer.

Speaking on the occasion, Chief Minister Dr. Sarma said that the Assam Government took this step considering the hardship the ex-employees, workmen and their families had to endure due to non-operation of the mills since the last few years.

“When the BJP-led Government came to power in the State, we took several steps such as providing free electricity, scholarships to children of the former employees, etc. When we were elected for a second term, a decision was taken to buy both the paper mills following guidance from Prime Minister Narendra Modi and Union Home Minister Amit Shah to address the issues faced by the families of the ex-employees,” the Chief Minister said in his speech.

He announced that his Government would put in efforts for opening a new paper mill at the plot of land of the Cachar Paper Mill, while the land of the Nagaon Paper Mill would be utilised for expansion of the State capital region.

Dr Sarma said that under this relief package a trust would be created with an outlay of ₹ 25 crore which would be utilised for medical benefit, educational support, social assistance, etc., of the ex-employees and workmen.

Dispur has already initiated steps for providing employment to 84 eligible ex-employees of the mills in the State Government. The Chief Minister distributed appointment letters to 66 employees on the occasion.

107 employees of HPC have died after its two mills in Cachar and Nagaon became non-operational. While the Cachar unit stopped functioning in October 2015, the Nagaon mill in Jagiroad became defunct in March 2017.

On March 28, 2022: After a long and sustained effort, the State Government took over assets of HPC Nagaon and Cachar paper mills by paying ₹ 375 Crore through a transparent bidding process.

Both Nagaon Paper Mill (NPM) and Cachar Paper Mill (CPM) had a capacity of 1,00,000 Metric Tonnes Per Annum (MTPA) at each mill.“The financial package offered to us by the Assam Government is a fresh start for us’’