Cancer care goes a notch up in Barpeta 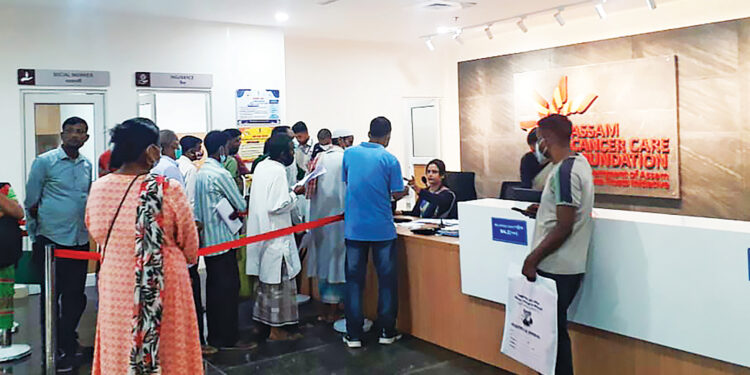 Patients and their attendants at the reception of Barpeta Cancer Centre

Bhanita Pathak (45), a resident of Pat Bausi area near Barpeta town is a breast cancer patient. She was diagnosed with breast cancer almost ten months ago. Her first chemotherapy was in Chennai but once the Barpeta Cancer Centre (BCC) was inaugurated, on January 29 this year, she took her second dose right in her hometown, avoiding all costly paraphernalia that came with the disease.

“My cancer was detected about ten months ago. When my doctor told me of this fact, I rushed to Chennai with two family members for my treatment. I took my first dose of chemotherapy there. Today, I am here to take my second dose,” Pathak tells Asom Barta.

She was all praises for the hospital and the government. “There is no difference in doctors’ treatment here or there in Chennai. It is cost effective and time saving. Moreover, cancer patients need rest. I am happy that we have a good cancer hospital in our district,” she says.

Chaiful Islam (54), a resident of Chatla area in lower Assam’s Bongaigaon district is a Laryngeal cancer patient. “My initial cancer treatment started a year ago at the B Barooah Cancer Institute in Guwahati. Today, I am here at this Centre to take my radiotherapy dose. Doctors’ advice to me was that since this hospital is near my hometown, I should take my radiotherapy treatment at the BCC. I am an Atal Amrit Abhiyan card holder. My entire cost here is free,” says Chaiful.

The Centre has come as a blessing for people of the district and nearby districts. Statistics suggest that a good number of patients accompanied by their caretakers have flocked to this newly constructed cancer hospital for treatment. This 135-bed BCC has state-of-the-art infrastructure.

Of late, there has been a spurt in the number of cancer cases across the State, including districts in lower Assam.

A unit of Assam Cancer Care Foundation, a joint venture between the Government of Assam and the Tata Trusts, BCC became operational on January 29 this year, a day after Prime Minister Narendra Modi inaugurated the centre along with six other cancer care centres of ACCF in the State, through the virtual mode.

“Each day, we have a lot of patients. The reason being Barpeta and its surrounding districts have seen a spurt of cancer cases, of late. We will procure advanced medical equipment like a PET Scan facility in the Centre in the months to come. The treatment would go a level up then,” says Dr Satya Narayan Sharma, the Medical Superintendent of BCC.

Dr Sarma says that since the day of its opening to October 15 this year, 6,804 OPD (Outpatient Department) consultations have been completed. “The Radiotherapy wing of the Centre is the most sought after. The laboratory in the Centre has carried out 11,200 tests hitherto.”

Dr Sharma said that the location of the Centre has helped in reducing financial and emotional burden on the local population, who otherwise would have travelled to Guwahati or outside the State for treatment.

“We have cases of reverse flow of patients. Cancer patients who were earlier treated out of the State are now coming back to us. This is good in many ways for patients. We are providing better cancer care facilities than many known hospitals in the country,” says the confident superintendent.

Dr Sharma said that detecting cancer early is half the battle won when it comes to cancer care and treatment. “Early detection of cancer is possible when people are aware about the disease and consult doctors. We have set up a kiosk on this alone. The idea is to create awareness among the people about the disease. Awareness is the first step towards prevention of any disease,” Sharma sums up.