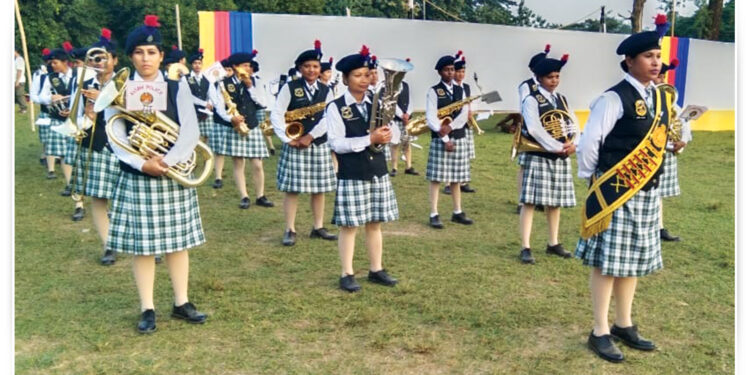 Mamu Bora of Nagaon was a constable with the Virangana wing of the Assam Police. She was hooked to music and dance from a very tender age although she could never hone her skills. Yet, she would perform Bihu and Sattriya dances and modern songs whenever opportunities came her way.

During her training, she used to be lured by the police band. It never occurred to her that she could be part of a band someday because barring a couple of central armed police forces (CAPFs), very few State police forces had an all women band. However, fortune turned a full circle for her when the Assam Police decided to form an all women band in 2021 after deliberations between the then Special DGP (T&AP) L R Bishnoi (now Meghalaya DGP), and DGP, Assam Police, Bhaskar Jyoti Mahanta. The responsibility to form one such unit was handed over to a retired Subedar Major of the Indian Army and the band master of the 10th AP Bn Ajit Gogoi.

“We had been planning an all women band for quite some time. We have an all-male Brass Band and even a Pipe Band in our battalions. The battalions undertake various cultural programmes on different occasions. We were witness to the talents of our women in the battalions in music and dance. To channelise their energy, we decided that an all women band would get them on par with the men.

“The day I got an instruction on the formation of an All-Women band, I wrote to all the battalions seeking interested candidates. I received feedback from 34 personnel. Our DGP named it Suranjana. It is a brass band. We started practising from December 2021,” said Gogoi. “The day I came to know that Assam Police is going to form a band for women, I decided that I will be a ‘Suranjana’ in it,” Mamu told this correspondent, adding that she plays the clarinet in the group.

Deboshree Roy of Kokrajhar is a member of the band. She was earlier posted as a constable with the 24 AP(Indian Reserve) Bn in Charaimari in Baksa. “When I got to know about the formation of this Band, I decided that I need to add a new dimension to my life having learnt about the duties of a police constable. My hobby is singing but I have never played any instrument. It is an altogether new experience playing the saxophone in the Band,” she said.

Constable Sonia Khatun was also inclined towards music since childhood. In Suranjana, she has attached herself to the side drum. “I am proud to be a band member. This is unprecedented. When people appreciate us after our performance, I leap into a different world,” she exclaimed.

Second BandMaster of 10 APBn Prasanna Rajbongshi narrated that for all the members associated with Suranjana, it was a first-time experience. “Normally, it is an 18-month course that one must undergo to be part of any such band anywhere. However, we have such dedicated members that in three months’ time, they have made themselves stage ready,” he informed this newsletter.

Suranjana has so far performed in Assam Police Day, Lachit Diwas in New Delhi; at the Home Guards Training Centre in Panikhaiti, and at the Assam Police Officers’ Mess in Guwahati.

“They have performed like professionals in many important government programmes. I am happy at the way they have progressed,” the DGP said while adding that the Band is getting better by the day in performing Hindi songs as well. “Being part of the band means constant practice and upgrading and cannot be a one-time affair.”

He said in the future, the Assam Police is planning for a dedicated band for each of the battalion, a news that would be music for the ears of Suranjanas like Kakolo Krishna Bora, Sonali Roy, Debashree Roy, Chandana Gogoi, and other colleagues of theirs.