No Result
View All Result
Home Best Practices of the States

by AB Bureau
in Best Practices of the States, English Edition
0
0 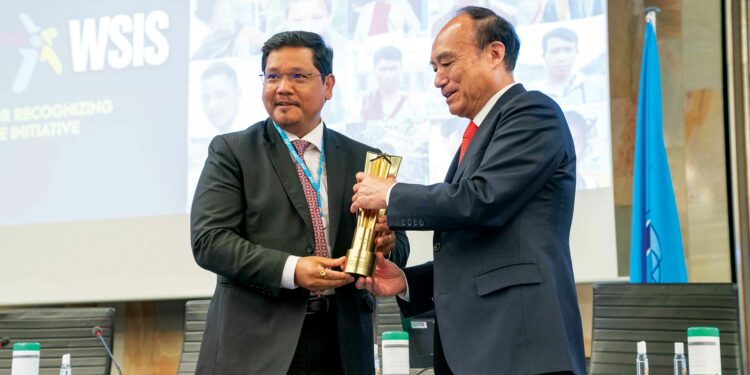 Meghalaya Chief Minister Conrad Sangma receiving the WSIS Award 2022 in Geneva, Switzerland. This is the only project from India to win this title for the year 2022.

The project intends to transform service delivery from being department-centric hitherto to citizen-centric hereafter thereby eliminating silos and facilitating world class experience in service delivery. For example, citizens would get outcomes such as direct benefit transfers, agriculture supports, etc., by providing simple information instead of “long cumbersome processes”, as the rationale of the project puts it. The project is based on India Enterprise Architecture (IndEA), the nation’s first State-wide implementation.

The State Planning Department is the nodal implementation department, while several departments and directorates have collaborated towards the finalisation of the architecture and plan .

“Generally, citizens are asked to provide IDs, certificates, licences, NOCs multiple times by multiple departments. This leads to delay, higher transaction cost and dissatisfaction among the masses. This happens as each department’s functions in its own way, without much collaboration and integration of information. MeghEA looks to resolve this core issue, by looking at processes from citizen’s points of view instead of service delivery department’s point of view,” says an official connected to the project in his email to Asom Barta. “While departments function within the existing structure, the information of departments are integrated through digital systems,” adds the official.

The project has several components such as Government to citizen or business services, Government to employee services and Government to Government services. The E-Proposal system, part of the Government-to-Government component, enables faster processing and tracking of schemes. The system completely transforms the ecosystem of administrative approvals and sanctions of citizen’s schemes. With the help of technology, the project integrates multiple departments, directorates and other Government agencies.

It has been piloted by the Finance Department of the Government of Meghalaya. The system named eProposal System is built on Low Code/ No Code Platform. This enables the department to add more services, modify processes and implement digital services in a short time frame.
The official claims that the project has made a difference in improving efficiency in governance of proposals by reducing their average sanction time from nearly 50 days to just 5 days.

“The eProposal system now leads to faster approval of schemes, which earlier used to take days and thus benefits to end citizens are delivered at the right time,” he says, adding “schemes are now tracked and information about proposals is available for efficient decision making. “ In one word, citizens benefit through transformation of these internal processes using digital technology.

The State Government Department is planning to expand the scope of the project by bringing all non-financial files into this system to achieve efficiency and attain the goal of a paperless governance.

The nodal department is planning to start implementing citizen services starting with Agriculture, Community & Rural Development, Fisheries, Animal Husbandry and Veterinary and Social Welfare departments. “This will change the way citizens avail government services from different departments. The plan also includes consent-based proactive services to be delivered to citizens of the State,“ he informs Asom Barta.

The project was nominated for WSIS Award 2022 in the category “The role of governments and all stakeholders in the promotion of ICTs for development”. It emerged as “Champion Project” in the category. Remarkably, this is the only project from India to win this title for the year 2022.