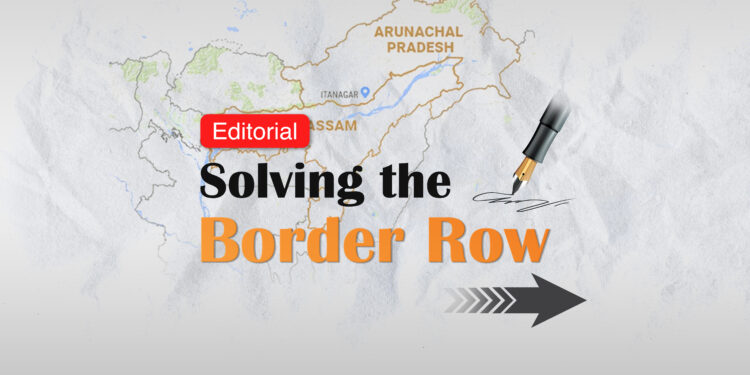 Borders are man-made geographical constructs whose destiny lies in the hands of people. Almost all nations that have ever come into existence since times immemorial have struggled to have a settled border. A cursory glance through the pages of history, written by either the victors or the vanquists, shows that the question of geographical expansion which in one sense means shifting of the border has occupied the centrestage.

The problem is especially severe when it comes to countries which have been colonised. India, being no exception. North East India, too, is an example of this. The British, who were out to exploit the resources of the region, left our borders unorganised and undemarcated, something which was part of a bigger design. The impasse continued even in post-Independent India. States in the region, especially neighbours, have been struggling to have their demarcated boundaries. The complexities in the approach is such that successive Governments at the Centre have not been able to solve claims arising from various quarters. The result is that we are still fighting to get these anomalies corrected. It is in the light of this that the recent attempts by the Governments of Assam and Arunachal Pradesh to settle disputes regarding its contiguous borders must be appreciated.

The Namsai Declaration as the document is called has been signed in a spirit of bonhomie and pragmatism. The Declaration has called for reduction in the number of disputed villages from the present 123 to 86. The Assam Chief Minister has also resolved to settle the dispute by September 15. Based on experience of the recent past, it seems that we are all set to embalm the pains of history and politics.

Assam’s problem is unique in the sense that it shares boundaries with all the other Northeastern States. Hence, it is no surprise that it has land disputes with its neighbours. However, the present Government, unlike previous dispensations, has shown unprecedented eagerness to get the border dispute solved. The efforts with Meghalaya being another example. Yes, there were unsavoury developments at the Mizoram border in the recent past, but one must appreciate that history extracts a price if one wants to rewrite it.