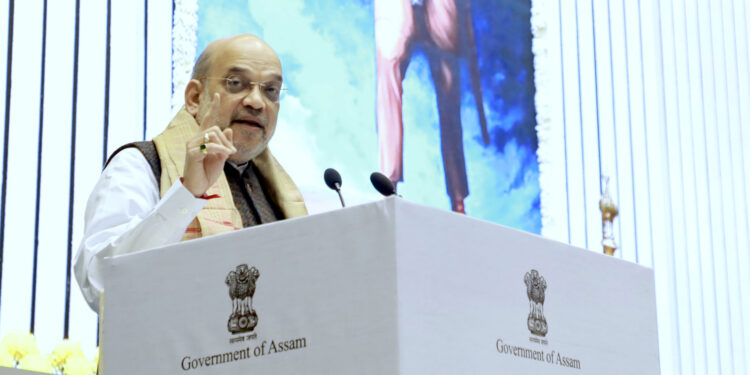 Union Home Minister Amit Shah during his speech in the plenary session.

Union Home Minister Amit Shah has asked historians, scholars, academics, and students to correct history replete with ‘lies’ by delving deep into the annals of 30 Indian empires that ruled for over 150 years besides 300 historical personalities. “I hear many times that our history has been distorted and twisted. There is a possibility that what has been written was right, but no one can stop us now from rewriting our history with pride. We will have to amend this and place our history in front of the world with pride,” he said this in the plenary session of the 400th birth anniversary celebration of Lachit Barphukan in New Delhi on November 24.

Underlining the slew of initiatives undertaken by the NDA Government under the leadership of Prime Minister, Narendra Modi to unravel the truth pertaining to Indian history, Shah sang paeans on the heroic exploits of Lachit Barphukan and the way in which the Ahoms defended their territorial integrity from repeated Mughal incursions. “Had it not been for Barphukan, the North East would not have been part of India,” the Home Minister said.
Chief Minister, Sarma, while addressing the gathering, said, “Islamist powers attacked Assam at least 22 times between 1204 and 1607 but could win nine times and those victories, too, did not last long.”

The plenary session was attended by Union Minister for Ports, Shipping and Waterways, and AYUSH, Sarbananda Sonowal, Minister of State for Petroleum and Natural Gas, Rameswar

Earlier, accompanied by Chief Minister Sarma and other dignitaries, Union Home Minister, Shah went round the Assamese village with rural settings created by noted artist, Nuruddin Ahmed, and the exhibition displaying the artefacts of the mediaeval times of Assam. A documentary on Lachit Barphukan was inaugurated by the Union Home Minister.

Two panel discussions and a cultural programme were also part of the event.