Over 1,100 militants surrender in Barak Valley 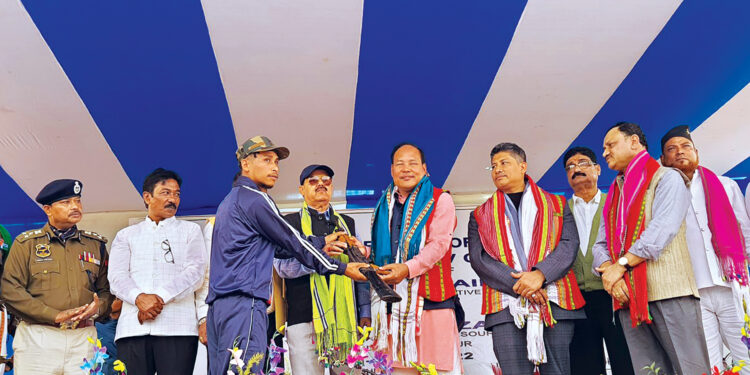 An ultra surrendering his arm during the ceremony at the CMHS Field in Katlichara, Hailakandi

In yet another breakthrough for the State Government’s continuous drive against insurgency, 1179 insurgents belonging to two different outfits in Barak Valley laid down arms on December 12 and joined the mainstream.

The militants, belonging to Bru Revolutionary Army of Union (BRAU) and United Democratic Liberation Front of Barak (UDLF-B), laid down their arms before Assam Assembly Speaker Biswajit Daimary and State IPR and Water Resources Minister Pijush Hazarika at a ceremony held at Katlicherra in Hailakandi district.

In his address, the Assembly Speaker said that some BRU youths had to take up weapons because they were deprived of basic rights for generations post India’s Independence.

“Our government extended its arms and both militant outfits, active in Barak Valley, have responded. Now, it is our responsibility to fulfil promises made to them,” Daimari said.

He said that the Government has included the Brus in Bodo Kachari Welfare Autonomous Council which will make them decide the kind of development their people deserve.

“They will enjoy all Government facilities and additional development projects will be issued for them,” Daimari added.
In the ceremony, State IPR and Water Resources Minister Pijush Hazarika said that the surrender of two militant outfits active in Barak Valley districts would usher a new era of peace and development in southern Assam.

He added that in the last one-and-a half-year, during the tenure of the present Government under Chief Minister Dr. Himanta Biswa Sarma, most militant groups in the State are returning to the mainstream.

He said that among the 1,179 cadres, 545 cadres are from Bru Revolutionary Army of Union (BRAU) and 634 are from United Democratic Liberation Front of Barak (UDLF-B).

Dhanyaram Reang, who formed the United Democratic Liberation Army (UDLA) in 2004, said that they had to take up weapons to protect their community.

BRAU leader Rajesh Charki said that they are happy to come overground and reiterated the demand for an autonomous economic council for the Bru community.