by AB Bureau
in English Edition, Entrepreneurship, News From The State
0
0 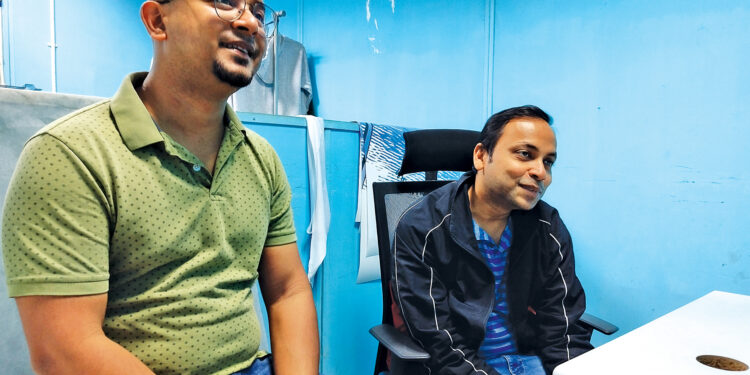 Pranab Jyoti Talukdar from Patsala in Bajali district, and Devraj Singha from Borguri in Tinsukia town were gainfully employed in the corporate world away from their native towns when a chance meeting turned them into partners. What was common among them was a thought to carve out something of their own. Both confided to their family members the desire to venture into uncharted territory of business. Like in most cases, their respective families were not too enthused about the idea of veering away from the sinecure of a corporate job to a world of uncertainties called entrepreneurship. Yet, the dominant idea in their hearts was so strong that they both realised its time has come.

During the Advantage Assam summit of 2018, when the textile major TT Garments was exhorted by the Government of Assam to invest in the State, the company made it clear that they were looking forward to getting on board local entrepreneurs to produce for them under a franchisee model. It so happened that both Pranab and Devraj were in the same hall where this development was transpiring. And the rest as they say is history.

Both decided to speak to each other respecting the sentiments each one was carrying deep within and decided that why not collaborate now rather than at some point in the future. That is how Novel Textile, their venture came into existence.

“To start with, we were producing for TT Garments their requirements for North East India, Bihar and West Bengal as their franchisee. Later, we started producing T- shirts in our name to cater to the market demand,” says Pranab. “We then expanded to school uniforms and then invested in a printing set-up. This is the first such set-up where full body sublimation, screen printing, and TShirt printing facilities are available.”

However, they too went through tough times like most businesses during Covi-19. “We were set aback by Covid-19. But we sensed an opportunity to produce masks. For one full month, we devoted our entire energy into producing masks. There was a demand for PPE kits as well. We could not cater to the demand because we had no licence as was mandatory. So, we could not take advantage of the opportunity. By June, after completing necessary formalities, and armed with certification from South India Textile and Research Association (SITRA), as well as a couple of other organisations, we started making PPE kits. We produced nearly 80,000 PPE kits during the two waves of Covid-19,” says Devraj.

It is also a company that is taking care of its stakeholders, its workers being one of them. “I have been working here since 2020. I am enjoying my work. I am contributing financially to my household,” says Rekha Bodo.

“It is important for budding entrepreneurs to remember that a business is an organic entity and needs time to grow. From the time we invested to a point where we started getting back some form of return took us time, and patience. Besides, there are new ideas as well which form an important ingredient in making one’s business grow,” says Pranab adding that in future he wants to offer franchisee to entrepreneurs within and outside the State.

Both entrepreneurs feel that textile and school uniform business in Assam is still at an infancy. It has potential to even solve issues of unemployment in the State, provided people come out of the mindset of getting a job and instead focus on creating jobs.