by AB Bureau
in English Edition, News From The State
28
0 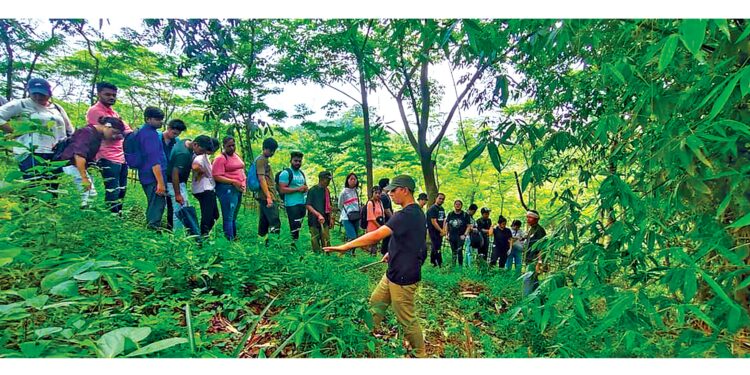 Agriculture is fast turning out to be a career option for many across the country and Assam thanks to agripreneurs and mavericks like Samir Bordoloi. Bordoloi, widely known across India as ‘Farmer Samir Bordoloi’, has been instrumental in bringing the youth back to their roots in the fields.

He secured a well-paying job in a multinational corporation immediately after his graduation from Assam Agricultural University. Life seemed settled for him. But something that he saw in the food industry disturbed his young mind. He saw the alarming impact of chemical fertilisers, and pesticides on the farming communities. Samir discovered that a direct connection between farmers and the consumers was missing. This he made his lifelong mission: To promote organic farming and serve the many farmers of India in a way that is dignified, aspirational, healthy, and fair.

Samir quit his corporate job in 2015 and opened his first plant health clinic called SS Botanicals in Jorhat. Like others, he,too,realised the intensity at which traditional food wisdom is vanishing and the pace at which food insecurity is growing due to unsustainable farming practices. In 2017, he established the Society for Promotion of Rural Economy & Agricultural Development, North East (Spread NE), an NGO that brings together youth from every section of the society to create awareness among farmers about local food and organic farming.

Samir started training the green commandos at a food forest in Sonapur, which is also their camp. His idea of farming is one formulated into a simple principle: ’Local People – Local Food – Local Economy’. This principle is borne out of the need to create awareness against exploitation of local farmers by big agro-based companies. He feels that local farmers are not paid commensurately for their work. Samir has trained 786 green commandos hitherto.

Spread NE attracts these commandos not just from Assam but also Manipur, Nagaland, Mizoram and other parts of India. For those commandos who live in or have ties with urban families, their ‘mission’ is to promote the consumption of local, indigenous and organic food among them.

Whether it is promotion among big groups or a casual conversation over tea at a relative’s place, green commandos persuade families to adopt a farmer from the village. Under this arrangement, these families can receive a year’s worth of herbs and other produce from the farmers. Each farmer is associated with several families who buy their produce exclusively from her/him. The farmer is free to sell the surplus in the market or use it for value-added activity.

In a bid to connect the commandos directly to the farmers, Samir began an initiative called ‘Farm Connect’ wherein the former train the latter at the local level and also market their products in cities.

“The food industry is one of the most profitable in India and yet, the farmer is the one who starves. With Spread NE, the farmer gets an assured income of about ₹ 15,000 per month. They generally go to cities like Mumbai, Bengaluru, and Delhi for petty jobs at half of this amount. Now with this initiative, at least they are living where they belong”, he told Asom Barta.

Since 2017, Samir and his team of Green Commandos have adopted over 150 schools. They teach students in making vermicompost, the importance of organic farming and the need to grow and consume local food products.

On the first day of the World Environment Week observed last month, over 54,000 schoolchildren across Meghalaya took to an innovative way to rejuvenate degraded forests by dispersing over 2.3 lakh seed balls, a campaign which bears his signature.

However, for him the best award is the growing crop of young enthusiasts he has commanded.