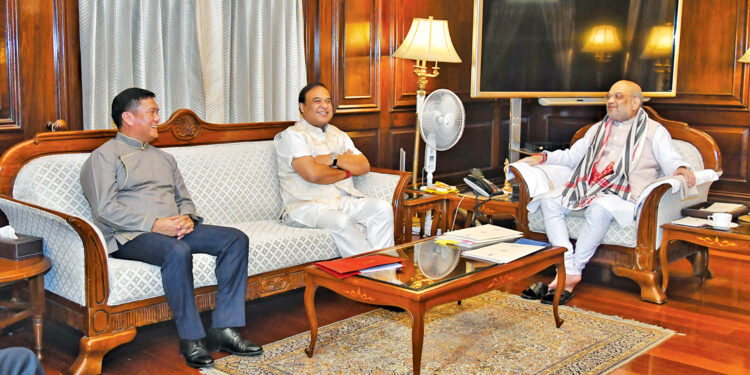 Keeping in tune with Home Minister Amit Shah’s consistent effort of facilitating the solution of the boundary dispute between Assam and Arunachal Pradesh, the chief ministers of both the States met the Home Minister in New Delhi on September 15 (Photo on left) to build on the progress made in the dispute. The meeting was convened by the Union Home Ministry.

The Home Minister is believed to have suggested a road map to both the chief ministers to solve the row in a defined time frame.

Even before the meeting started, the Assam Chief Minister Dr Himanta Biswa Sarma, who has taken it upon himself to work towards its solution, committed himself to amicably resolve the long-standing row once and for all in his tweet. The Arunachal Pradesh Chief Minister Pema Khandu also expressed a similar sentiment in his tweet.

The meeting was billed as a follow up of the Namsai Declaration signed in July.

Earlier Dr Sarma reviewed the progress made by the regional committees constituted for the purpose.

It is worth mentioning that the Namsai Declaration had called for reduction in the number of disputed villages 123 to 86. Dr Sarma and his Arunachali counterpart met in January, and April and constituted 12 regional committees, each covering the 12 districts of Arunachal Pradesh and Assam respectively, for joint verification of 123 villages. These committees were mandated to make recommendations based on the historical perspective, administrative convenience, contiguity, and people’s will to delineate the interstate boundary.

As if to drive home his persistence in solving these disputes, the Assam Chief Minister also met his Mizoram counterpart Dr Zoramthanga at Assam Bhawan in New Delhi to initiate a dialogue on similar lines.