Assam, NE back Murmu to the hilt 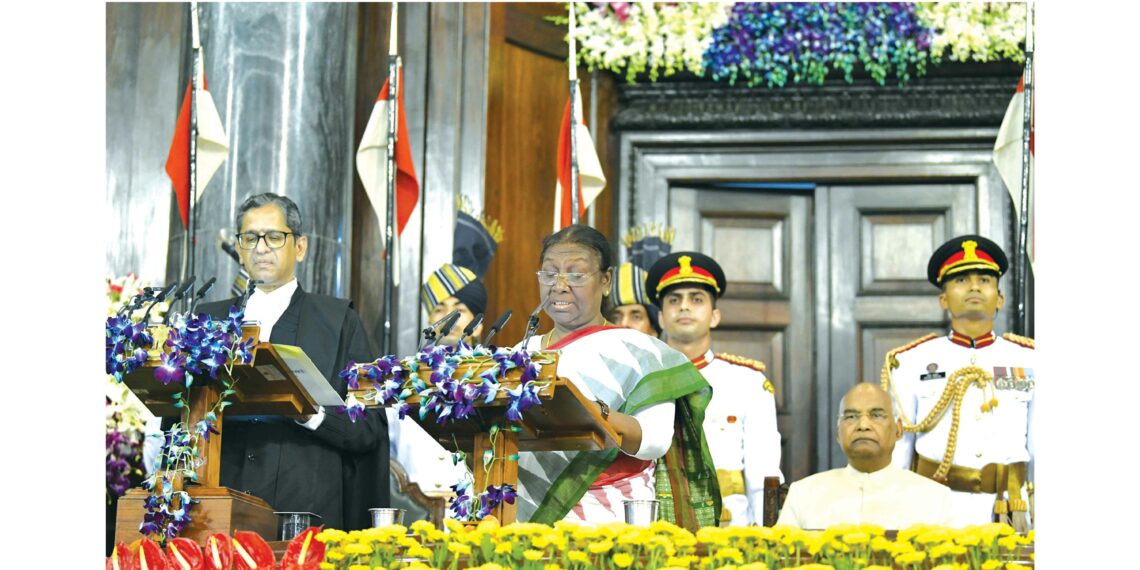 Droupadi Murmu being sworn in as President by Chief Justice of India NV Ramana.

Assam and other Northeastern States backed President Droupadi Murmu to the hilt in her presidential election campaign. Assam legislators gave the new President 104 votes signalling the support she had enjoyed in the State cutting across party lines.

Earlier, she had campaigned vigorously in all the seven sister States of North East, besides holding a meeting with Sikkim legislators near a resort in Siliguri in West Bengal on July 11.

She arrived in Guwahati on the evening of July 5 accompanied by Union Minister Sarbananda Sonowal after visiting Manipur and Tripura. She was received at the airport by Chief Minister Dr. Himanta Biswa Sarma and some of his Cabinet colleagues.

Her two-day visit to the State was eventful. On July 6, she visited Arunachal Pradesh, Nagaland, and Meghalaya to return to Guwahati. Later, on July 7, she went to Mizoram and returned to the city later in the afternoon wherein she visited the Kamakhya Temple before meeting Assam MPs and MLAs of the Bharatiya Janata Party as well as those of its alliance partners AGP and the UPPL in a city hotel. Also present were three MLAs of the BPF, which is not a part of the ruling alliance in Assam. She was accompanied by BJP’s national spokesperson Sambit Patra.

She was sworn in as the 15th President of India on July 25 by Chief Justice of the Supreme Court of India NV Ramana. Hailing the President, Chief Minister Himanta Biswa Sarma was among the first to take to twitter to congratulate the first ever Tribal to hold the highest constitutional post in the country.

104 Assam MLAs vote for Murmu
Of the total votes received by Droupadi Murmu during the presidential polls, she received the support of 104 legislators from Assam out of the possible 126.