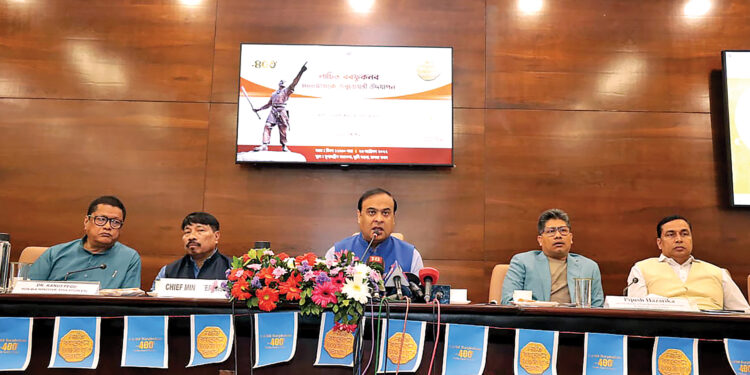 Come November 24 and all roads will lead to Vigyan Bhawan in New Delhi for the concluding function of the year-long 400th birth anniversary of 17th century Ahom General Lachit Barphukan. The day is observed as Lachit Divas in Assam.

The Government of Assam is pulling out all the stops to organise the event in the national capital in a big way.

The two-day event on November 23 and 24 at Vigyan Bhawan will showcase the exploits of one of the great warriors of Eastern India who defeated the formidable Mughals in the great Battle of Saraighat.

The Government aims to bring to national limelight the great warrior, who is hitherto lesser known in other parts of the country. To make the event a resounding success, a series of programmes have been lined up to project the great Ahom General in proper perspective.

The Government of Assam is holding discussions with Assamese organisations and media persons of Assam based in Delhi on showcasing the heroic deeds, valour, and patriotism of Lachit to the rest of the country and to give the great warrior a pride of place in the annals of history.

“The Chief Minister is taking special interest in glorifying the illustrious life of Bir Lachit Barphukan on the national stage and give the great warrior the rightful place in the annals of history,” said Assam Minister for Information and Public Relations, etc., Pijush Hazarika, adding that the Government’s aim is to glorify the heroic deeds of the Ahom General globally.

Assam Chief Minister Dr.Himanta Biswa Sarma is leaving no stone unturned to make more Indians aware about the great Ahom General, who became a legend in his lifetime. The Chief Minister, through a letter, has requested his counterparts in other States to include a chapter on the warrior in their textbooks for school and college students.

The Government of Assam is fully geared up for branding the event in a big way in Delhi-NCR through publicity blitzkrieg. Pyrotechnics will be put up together with exhibition and two seminar sessions throwing light on the life and times of Lachit Barphukan. A book on Lachit Barphukan will be released and a documentary will also be screened. The rich cultural mosaic of Assam will also be showcased. Eminent personalities from Assam will be invited to the event together with 200 college and university students with backgrounds in History.

As part of the celebrations, a Mobile App and a Web Portal lachitbarphukan.assam.gov.in have been launched by the Chief Minister wherein people can get wealth of information on the legendary warrior and can upload write-ups which will enable them to get certificate of appreciation from the Government. Essay competitions will be held in schools and colleges across the State and the best essays will be awarded at the district and then at the State-level. A preformatted physical booklet will be given in which the participants can pen down on the warrior and upload on the portal. Assam Police will conduct a march past in which National Cadet Corps will participate. “The purpose behind this massive exercise is to turn the epoch-making event of Lachit Barphukan’s 400th birth anniversary into a mass movement. That will be a fitting and lasting tribute to the great hero,” quipped the Chief Minister.

On February 25 this year, the then President Ram Nath Kovind kickstarted the 400th birth anniversary celebrations of the 17th century Ahom General at the Srimanta Sankardeva Kalakshetra in Guwahati and laid the foundation for a war memorial and a 150-foot bronze statue of Lachit Barphukan. Kovind also launched the beautification and repair work of Barphukan’s burial ground in the Jorhat region.