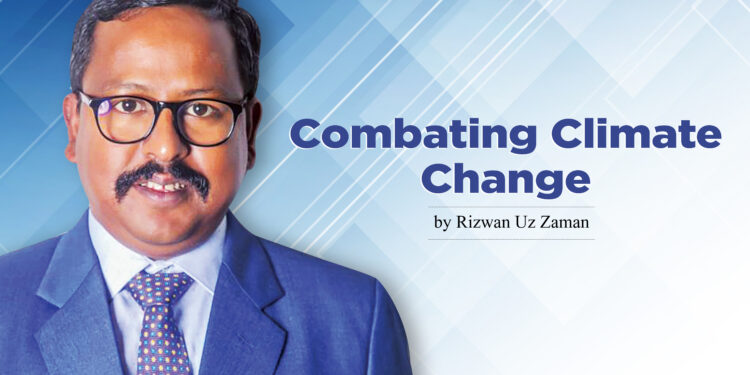 Today Climate Change is an international emergency affecting lives, livelihoods, the economy, and our sustenance. Evidence of observed changes in extremes such as heatwaves, heavy precipitation, droughts, and tropical cyclones, and, in particular, their attribution to human influence, has strengthened since the Intergovernmental Panel on Climate Change (IPCC’s) AR6 report. Further, global warming of 1.5°C and 2°C will be exceeded during the 21st century unless deep reductions in CO2 and other Greenhouse Gas Emissions (GHG) occur in the coming decades (IPCC AR6 WG I, 2021).

Assam has the highest overall vulnerability index in the country (CEEW, 2021) while India is ranked 7th in the list of the countries most affected by extreme weather events (Germanwatch, 2021). Over the years, the State has been reeling under the compounding and cascading effects of frequent and extreme hydro-meteorological hazards. According to the revised Assam State Action Plan on Climate Change (ASAPCC) version 2.0 (2021-2030), by 2011-2040, the annual average maximum temperature ranges across Assam are likely to rise by 0.85°C and 1°C; annual average minimum temperature may increase up to 0.85°C and 0.95°C; annual average rainfall in Assam is projected to increase by 3.04mm.

Recent climate vulnerability assessment for the Indian Himalayan Region (IHR) using a common framework developed under the National Mission for Sustaining the Himalayan Ecosystem ranked Assam as the highest vulnerable State with a VI of 0.72 among the IHR States. The report also states that Assam has 15 of India’s 50 most vulnerable districts. Climate change is of great relevance to Assam given its strategic location in the North East and varying geophysical conditions, as well as its significant developmental needs with a large part of its population residing in rural areas, many of which are exposed to recurrent droughts, floods, heat waves, hailstorms, affecting livelihoods and health of the population at large.

ASAPCC 2.0 is a concerted effort by the Assam Government to adapt to and mitigate the adverse impacts of human-induced climate change. The Assam Climate Change Management Society (ACCMS) has prepared the revised document in consultations with all the line departments and other important stakeholders. ACCMS is a special-purpose vehicle of the Government of Assam to implement the ASAPCC and to coordinate with all other stakeholders to take climate actions.

The revised document has considered the latest advancements in climate science and global and local climate developments. The revised ASAPCC 2.0 for 2021-2030 envisages the Prime Minister of India’s concept of Panchamrit commitments, Sustainable Development Goals; Nationally Determined Contributions (NDCs), and India’s other international commitments such as the Paris Agreement and Sendai Framework for Disaster Risk Reduction, etc.

The overall objective of the revised ASAPCC will enable Assam to enhance adaptation to climate-induced risks that the State is susceptible to, mitigate the drivers of climate change at the State level in line with India’s NDCs, and institutionalise the revised ASAPCC while building awareness and capacities to implement the same.

The revised ASAPCC provides a comprehensive strategy to protect Assam among those States that are highly vulnerable to extreme climate events. The State Government is committed to taking affirmative actions at the grassroots level to encourage adaptation and mitigation innovations with an emphasis on all sectors, including education; the document is dedicated to contributing towards global and local climate change issues. Sectoral vulnerability profiling is also part of the study, and it helped identify and prioritise the actions in various sectors.
Notwithstanding the robustness of ASAPCC 2.0, there exist a few systematic challenges also for the State to a mainstream climate action plan, which can be addressed by: