by AB Bureau
in Border Vibes, English Edition, News From The State
6
0 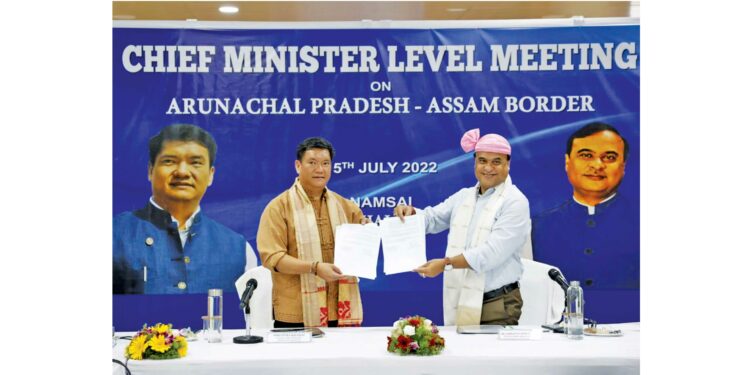 The chief ministers of Arunachal Pradesh and Assam after signing the historic Namsai Declaration.

Heralding a watershed moment, chief ministers of Assam and Arunachal Pradesh Dr. Himanta Biswa Sarma and Pema Khandu respectively signed the Namsai Declaration on July 15, 2022 wherein both the States have resolved to solve the long standing border row between the two neighbours.

The Declaration has called for reduction in the number of disputed villages from the present 123 to 86. Dr Sarma later tweeted that “based on the present boundary, all border disputes between both the States shall be resolved by September 15, 2022”.

In August last year, the Chief Minister had stated in the Assam Assembly that there were at least 1,200 areas of dispute along the border with Arunachal Pradesh. Both the chief ministers met in January and April this year to resolve the row. As a result of these meetings, the two neighbours had decided to constitute 12 regional committees, each covering the 12 districts of Arunachal Pradesh and Assam respectively, for joint verification of 123 villages. These committees were mandated to make recommendations based on the historical perspective, administrative convenience, contiguity, and people’s will to delineate the interstate boundary.

The regional committees will submit their first report on the above and any other areas where consensus has arrived, before August 15, 2022.

The Declaration states that the location of six villages could not be located on the Assam side. Therefore, if these villages physically exist in Arunachal Pradesh, it shall continue to remain with it.

Arunachal Pradesh Chief Minister Pema Khandu described the Declaration as a significant and landmark progress towards enduring brotherhood, peace and prosperity in the North East.

The 800-km-long interstate border has been the site of many conflicts since colonial times.