Crackdown on drugs to continue: HM 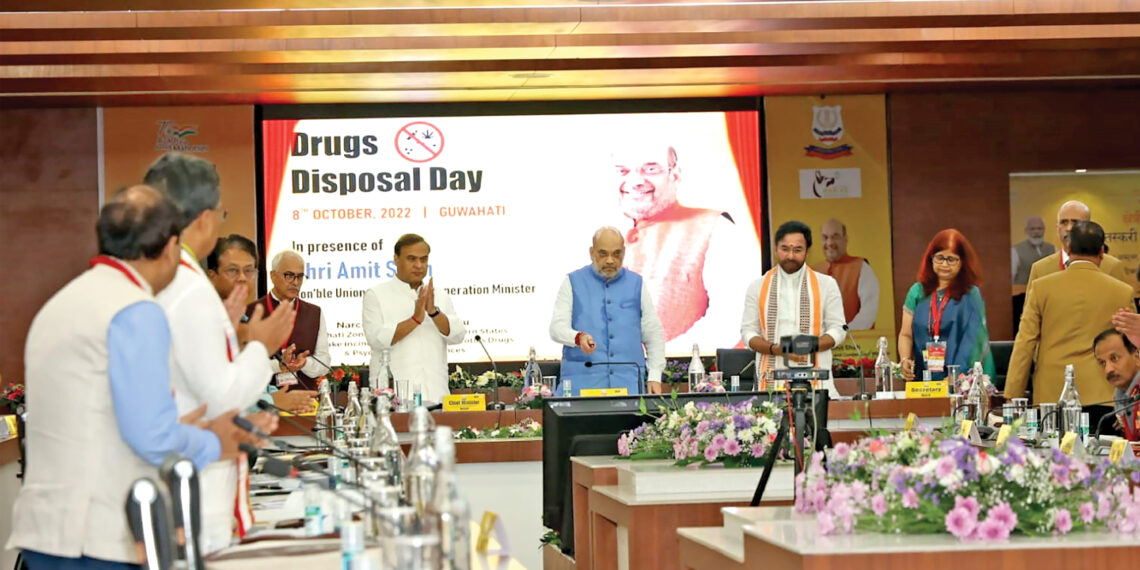 Union Home Minister Amit Shah has said that drug trafficking is a borderless crime and called for better coordination among all drug law enforcement and Intelligence agencies and bordering districts of the North Eastern States to tackle it. He said this while chairing a meeting with chief ministers, chief secretaries and director generals of police of these States on ‘Drug Trafficking and National Security’ in Guwahati on October 8 during his three day visit to the State. He reiterated this during his meetings with home ministers of various states in a chintan shivir in Surajkund in Haryana in the last week of October.

The meeting in Guwahati discussed the drug abuse scenario in the region and ways to mitigate it. It was also attended by the Union Home Secretary, Director General of Narcotics Control Bureau (NCB) and other senior officials.

Shah said that the spread of drug smuggling is very fatal to any society. “The damage caused by any terrorist incident is limited, but the spread of drugs in the society destroys the generations. Just like a termite it makes the youth power of our society and the country hollow,” said the Union Home Minister. He said that in the Azadi ka Amrit Mahotsav, the Ministry of Home Affairs has strongly resolved to fulfil the Prime Minister Narendra Modi’s vision of ‘Drug-free India’.

“The Government of India under the leadership of Prime Minister Narendra Modi has adopted the policy of zero tolerance to thwart every attempt by the ‘Dirty Money’ of drug trafficking and ‘organised mafia’ to damage the country’s economy and national security,” said Shah.

He said that the Ministry of Home Affairs under the leadership of Prime Minister Narendra Modi is committed to curb the menace of narcotics.
About 40,000 kg of narcotic drugs were destroyed across the region during his visit. Shah witnessed the destruction of the drugs virtually from the conclave venue. The Narcotics Control Bureau in Guwahati burnt 11,000 kg of confiscated drugs while the Assam Police destroyed around 8,000 kg of contraband.

He emphasised the use of modern technology in curbing drug trafficking and establishing coordination among all the agencies.

Shah said that the success of the strategy to destroy the supply network of narcotics in the country is very much visible in this short span of time. He said that the seizure of narcotics after 2014 has proved it. During 2006-2013, 1.52 lakh kg of drugs were seized which doubled to 3.30 lakh kg between 2014-2022.

He said that the main objective of this regional conference is to put the seriousness of the Centre on this subject in front of the North Eastern States.

“We have to bring a synergy by bringing the States together in this fight, bringing all the agencies related to narcotics on one platform and giving a message at the national level that now the country has made up its mind to go to the root of this problem and solve it,” added Shah.