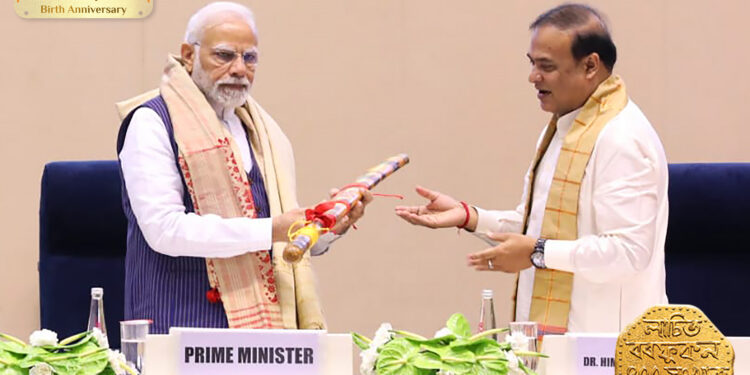 The celebrations of the 400th birth anniversary of one of India’s greatest warriors Lachit Barphukan reverberated in the air in the national capital from November 23 to 25. Hordes of visitors from different parts of Assam, Delhi-NCR and elsewhere joined in the celebrations to make the three-day event a roaring success.

The Prime Minister was the chief guest in the valedictory programme which started with the singing of Aai Sing Lao devotional prayer song of the Ahoms. Mr Modi paid floral tributes at the portrait of Lachit Barphukan wherein he was presented with the Ahom hengdang (sword) by Assam Chief Minister Dr. Himanta Biswa Sarma.

In his address the Prime Minister said that many unsung heroes of India were deliberately erased from the annals of history, citing the example of 17th century Ahom General Lachit Barphukan. “Our history is not only about slavery but also about victories and saga of valour and sacrifices of countless fighters. It’s about standing against tyranny and oppression with unprecedented valour and courage…”, he said adding, ” Unfortunately, we were taught, even after Independence, the same history which was written as part of a conspiracy during the colonial era. After Independence there was a need to change the agenda of foreigners who made us slaves, but it did not happen.”

In his speech, he interrogated, “Does the valour of Barphukan holds no significance? Does the sacrifice of tens of thousands of Assamese who fought against the Mughals to defend the country’s culture and identity have no importance?”

The Prime Minister pointed out that historians had wrongly projected India as a land of the defeated and vanquished… and emphasised that only when a nation knows about its real past, it can learn from its experiences and tread on a correct path for the future. The Prime Minister was quick to add, “It is our collective responsibility that our sense of history is not confined to a few centuries or decades.”

Complimenting the Assam Chief Minister for holding the event in the national capital and for taking steps to celebrate the legacy of its heroes, Modi said the country is rectifying the mistakes made earlier of not giving them their due place in history, and the event to commemorate heroes like Lachit is an effort in that direction. The Prime Minister suggested creating a grand theatre play on Lachit Barphukan on the lines of the one on Chhatrapati Shivaji and enacting it across the country. He also released a book, Lachit Barphukan: Assam’s Hero Who Halted the Mughals, in the programme.

Speaking on the occasion, Assam Chief Minister, Dr. Himanta Biswa Sarma said that Prime Minister Modi always inspires them to bring history, unsung heroes to light. “PM Modi always inspires us to bring our history, unsung heroes to light. This is our humble effort to bring the proud saga of Lachit Barphukan before the country. But just the efforts of the Government are not enough, there should be efforts from people, historians too.”

“Humble request to historians – India isn’t just the story of Aurangzeb, Babar, Jahangir or Humayun. India is of Lachit Barphukan, Chhatrapati Shivaji, Guru Govind Singh, Durgadas Rathore. We should make an effort to see in a new light. It will fulfil our dream to be Vishwa Guru,” he added.
Union Minister for Ports, Shipping and Waterways and AYUSH, Sarbananda Sonowal, in his speech, spoke on the heroic deeds of the great warrior and lauded the efforts of the Government of Assam to perpetuate his hallowed memory for posterity.

The Prime Minister took a view of rural Assam and the exhibition on historical perspectives and appreciated the efforts to showcase them in the national capital.

The year-long celebrations of the 400th birth anniversary of Lachit Barphukan kicked off in Guwahati on February 25 this year with the then President of India, Ram Nath Kovind inaugurating the event.