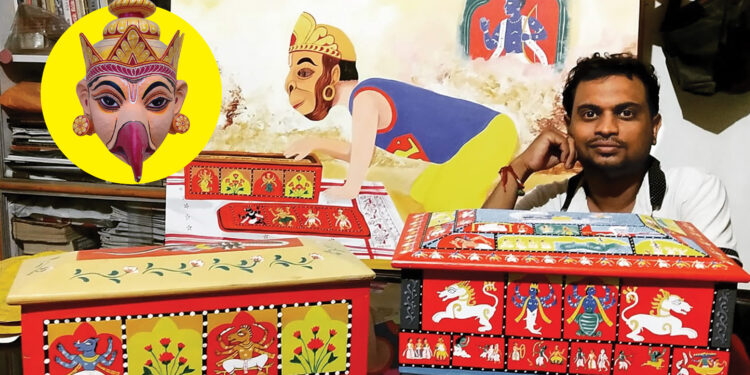 He was then merely five. One of the best-known artists from Assam Pranab Barua had opened his Roop Rang School of Drawing and Painting in the heart of Nagaon. Kshama Das, the mother of the toddler, enrolled her son in the school to learn a thing or two about painting or drawing. The prodigious child who had started feeling paints, brushes and the papers under the tutelage of a top artist later became a Guinness Book of World Record holder for sketching a portrait by using the largest paintbrush. The boy was Sujit Das.

“I am the son of a middle-class household. My father Kamakhya Chandra Das started Biswanath Mistanna Bhandar, said to be the second sweetmeat shop in Nagaon. I was told by my father that even Lokopriyo Gopinath Bordoloi was a customer. When the business shut down, we opened a cycle stand near Krishna Cinema Hall, next to our house. I had my first earning from there: ₹ 1. I bought colours and painting brushes from my first earning,” he reminisced.

He is an eminent name among those who are into manuscript and folk-art painting in Assam. “In 1995, my mentor Pranab Barua showed us paintings from Chitra Bhagvat and asked to draw any two paintings from there. That was my inspiration. Watercolour was not mainstream then and nor was it in extensive use for manuscript paintings However, with time, I started studying more about the medium through various books and became familiar with it,” Das told Asom Barta.

In his college days, he used to even draw on hoods of rickshaws to generate pocket money. “Alongside my involvement with working on book covers, comics and newspapers, I roamed about the nook and cranny of villages to understand the rural life of Assam which had inspired these folk-art and manuscript paintings. In the meantime, I also came in touch with mask artist Devakanta Hazarika and learnt from him the usage of colours and materials in mask making and understanding manuscripts. In no time, I realised Sattriya culture had seeped into my being,” Sujit told this reporter.

He also received a fellowship from the Centre for Culture Resources and Training of the Ministry of Culture to research manuscript and hand-written works like Kalikapuran, Haribanshapuran, Chitra Bhagavat, and various artwork included in the Bhagavat.

His varied experience has helped him exhibit his works in various States of India and around the world and conduct workshops on Xattriya art forms. Starting with Dubai, he has since exhibited his works in Russia, Cambodia, Egypt, Indonesia, Singapore, China, Sri Lanka, Bangladesh, Bhutan, Nepal, and other European nations. “My most memorable experience was in Russia. The Russians are generally inclined towards Indian art and cultural forms. They have always warmly received this form of art,” he said.

Champak Borobora, an artist, has all praises for Sujit. “I have known him since his childhood. His exceptional concentration is noteworthy. At a very young age, he has taken Assam’s manuscript painting to an international level,” he told Asom Barta. “He has undertaken a great initiative to preserve a tradition by opening an art school to promote what he practices.”

From His Holiness The Dalai Lama to Duke of Cambridge Prince William and Kate Middleton are among those who have appreciated his art form. “I am sure Xattriya, Tai, Rajagharia (Royal) and folk-art forms will will find their standing around the world,” he said.

When he started getting exposure after his visit to other countries, Das felt the need to preserve the heritage of such a rich cultural tradition. It was then that he conceived the idea of an art village which he established in his residence. This is the biggest privately held art gallery and museum in the State. “Some 15-years-back when I had dreamt of an arts village, I had no money. A project like this sans Government patronage was inconceivable. However, I exhausted all my savings, took a loan from a bank and on March 14, 2021 amid the second covid outbreak, we managed to open the arts village for the public,” the artist said.

The Art Village has invaluable manuscript paintings, sculpture, puppets and masks from different countries, an Ahom era boat, remnants of the British era and those from World War II, besides a floor dedicated to practice and discussion of Xattriya culture. The walls of the art village are decorated with folk paintings like Khusmora Manuscript Paintings, art forms of tea tribes, etc. The theme of the art village is life of rural Assam.

A massive believer in the capacity of the new generation, Sujit Das is a milestone for talents to look up to.