No Result
View All Result
Home Best Practices of the States

by AB Bureau
in Best Practices of the States, English Edition
6
0 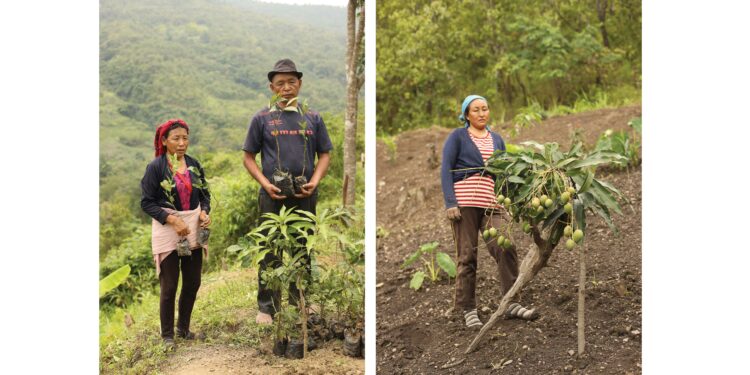 Assam is well endowed with plethora of indigenous fruits like Yellow Plum or Mirabelle Plum (Xoon Bogori), Green Peach (Nora Bogori), Pomelo (Robab Tenga), Java Plum (Jamu), Indian coffee plum (Ponial), Hog Plum (Omora), White Mulberry (Nuni), Burmese Grape (Leteku), Rose Apple (Bogi Jamu), Bastard Myrobalan (Bhumura), Bullet Wood fruit (Bokul) and many more. Not only do these exotic indigenous fruits taste delicious they also have the potential to capture the international market thereby empowering the farmers. To do so, the State can borrow a leaf out of neighbouring Nagaland, and that, too, from the effort of an NGO.

Under its ambitious mission of ‘Trees for Wealth’ (TfW) launched in 2019, the Entrepreneurs Associates (tEA), an NGO in Nagaland, has envisioned the State as the ‘Fruit Hub of India. It aims to plant 2 million fruit trees by 2025 thereby empowering 10,000 farmers and impacting 200 villages across the State.

The NGO is of the view that the North-Eastern States can significantly augment their revenue by planting fruit trees and thereby making use of the rich biodiversity of the region. It feels that since most ethnic communities of the region have fragmented land holding, individuals cannot take up mass cultivation of fruit trees. However, if done collectively, they can arrive at a critical mass and the required scale to make it profitable.

Hence tEA innovated a model “Micro by One, Volume by Mass” where the idea is to have 1 million farmers planting 100 fruit trees each. This makes it 10 crore fruit trees. If income from this effort inspires individuals to plant on an average 1,000 such trees, then 1 million people planting 1,000 trees will make it 100 crore fruit trees. A back of the envelope calculation shows that this can propel the region to add Rs 1 trillion into the economy with one fruit tree generating ₹ 1,000 per annum.

The movement has been instrumental in introducing quick fruit yielding trees like plum, orange, lime, guava, persimmon, avocado, mango, fig, tamarillo (Naga tree tomato), walnut, pears, litchi, etc., so that farmers in Nagaland can harvest early and start earning. This is projected to motivate them to adopt fruit tree plantation as a viable long-term livelihood. Since the launch of the movement, 4.6 lakh fruit trees have been planted. It is targeting an additional 5 lakh trees by the end of 2022. The movement is expected to create opportunities in logistics, cold storage and food processing industries and generate 5 million jobs in the region.

Speaking to Asom Barta, Neichute Doulo, CEO (the Entrepreneurs Associates) says, “Planting 1 billion fruit trees will be our small contribution to reverse climate change and restore our environment. tEA innovated the Trees for Wealth (TfW) movement because unlike planting any tree, planting fruit trees generate cash income for farmers which, in turn, can facilitate their children’s education and provide economic security to people in the villages.” He said that he was even willing to travel to other States to share his knowledge with the people.

“Assam can also take up this movement. We will be more than happy to come and share how it should be people-led and not Government-led with the Government acting as a facilitator. We are open to collaboration with interested NGOs (or even Government departments) who want to take up fruit tree plantations,” he adds.

In an email conversation with Asom Barta, fruit farmer Thejozo Kezo from Phek District, Nagaland credits the Trees for Wealth movement for getting his life back on track. A school dropout, he was wondering what to do with his life when he came across the TfW movement.

“I dropped out of school. I came across tEA’s movement for Trees for Wealth by planting fruit trees. tEA helped me with poly bags and green shade for the fruit tree nursery last year. This year alone, I have earned around ₹ 2 lakh by selling fruit tree saplings,” he says. He said that he was planting up to 1,000 Persimmon fruit trees, 500 Tamarillo fruit trees and 1,000 Plum fruit trees this year. He was hopeful that this will give him significant income after a few years and help him build a house in his village and get married. “The TfW has made me self-employed. I thank tEA for showing me the way to use my village land which I thought was almost useless,” Kezo says.